Coming Back For A Second Chance: Danica’s Story 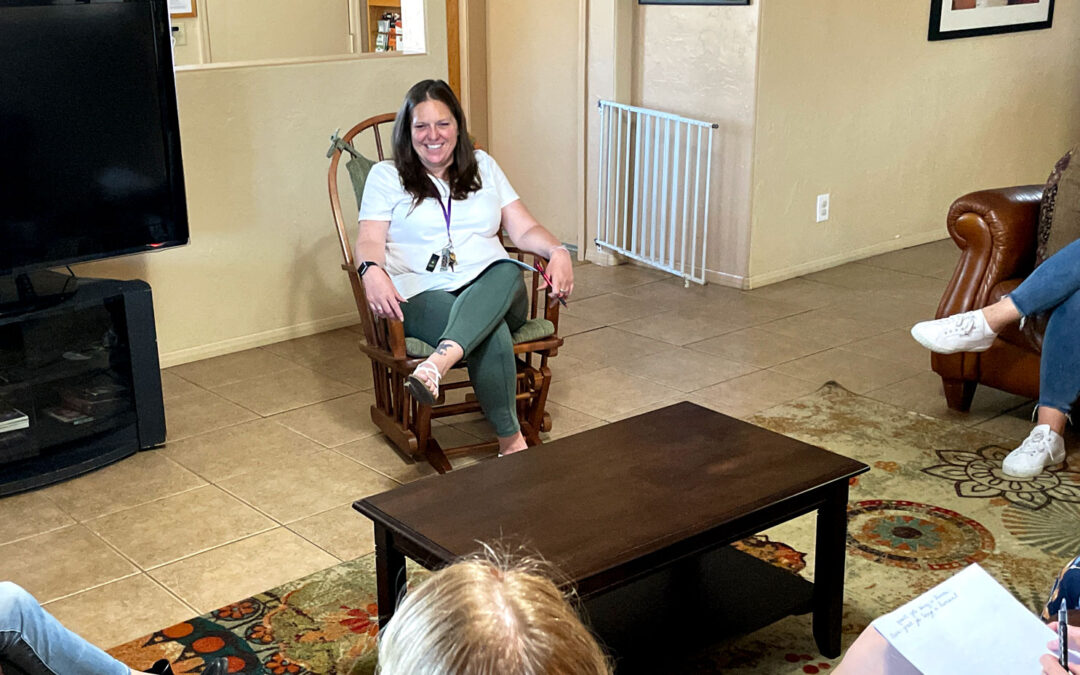 “Now, I can hear things differently than I ever have before. I want to take it all in because it all makes sense to me now. ”

A note from Stepping Stones:
Danica’s story is a special feature that exemplifies the hard work and dedication we see everyday in the adults who work with our advocates. We are so proud of Danica and love the chance to share her story!

“I was having a lot of issues when I was younger, and it was based on my parents breaking up, getting back together, and then moving from state to state. My mom and dad got married at 15 and 17. My dad was a really bad alcoholic and had some severe manic depression issues that he never addressed. They kept that roof over our heads and food on the table and did their best. They didn’t know anyway else. I never realized how much of an impact that had on me and didn’t see I was doing the same thing, plus more, to my daughter.

With my husband, I always believed that somehow it would turn around or get better, but it never did. It always got worse no matter what.
We were abusing each other basically. He’s busting in the door when I would try to lock myself in a room to stay away from him. It came down to the point where I was trying to run from everything, and I would take my daughter on the road with me, making things worse when I come back. Because of my substance abuse, I would never call the cops.

I just couldn’t handle things anymore, and I went to my daughter’s school and broke down, and that’s when they got other people involved. I was able to come to Stepping Stones. 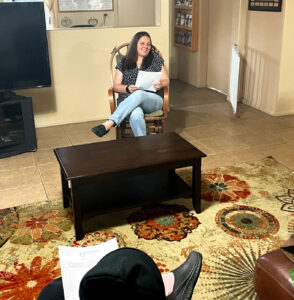 When I first came to Stepping Stones, it was really hard for me to trust, but I had a roof over my head, a room, showers. That right there showed me there’s a lot of goodness in the world and people. So, it was my first step to actually trusting other people again.

It was this safe environment, but it was really hard at the same time. I was very defiant and defensive, and I was always thinking that someone was going to use anything I said or did to put me down. That’s from the mentally abusive relationship that my husband and I ended up having.

I had a really hard time even absorbing any of the support groups because I would just get super emotional and have to walk out. But, I slowly learned to come back in and I was benefiting from a lot of things.

It was very hard for me to join any kind of groups with the anxiety I was having. I had always tried to control everything with substance abuse. I couldn’t see before because I just thought that’s the way life was and I didn’t know any other way. It was like a huge open door in so many respects.

In Danger After Shelter

I was there for the four month program. I was still scared of everything. I ended up getting an apartment and did well for a while. I was sober for nine months, and then financially I started barely making it. It was getting really hard again and I was lonely. I attempted to do services with Stepping Stones, but then I relapsed. I started living in fear all the time.

I brought somebody back into my life, and he got out of prison, so I thought he was sober. I thought, well, I need financial help. I could help him, we could help each other because we were pretty close before. Slowly, he ended up relapsing and lying to me about it.

I also relapsed, and I was afraid to ask for help because I knew all these signs. And the more I tried to confront him about it, the worse it got. It got to the point where he started drinking really bad, and I tried to throw him out. He ended up strangling me to the point where I blacked out.”

“When I came to, I started just yelling out the window for help. Somebody called the cops and that frightened him. He had already had a warrant because he had stopped seeing his probation officer. When he left with his stuff walking down the street, the cops picked him up.
I was so scared because of my relapse that I grabbed my daughter because I was fearful that they would take her.

It started all over again. Things just got worse and worse. I lost my job due to my emotional stuff. But, I wouldn’t get help because I had hid everything for a long time, and I just let everybody down.

I resorted to attempting to take a bunch of pills, but then I knew this was totally messed up for my kid, and I threw them up right away.
After that, I split to find a new life. I took the rest of the money I had because I wasn’t going to be able to pay my rent anyway. I just made all the wrong decisions and I knew better, but that made it even harder.

I went to Idaho, stayed there for a while, but winter was coming. I didn’t know how I was going to do this with my daughter. So, I left with 20 bucks and 1/3 tank of gas, and I made it back to Arizona through miracles. There had to be something, God, a higher power, that put these people there to help me along the way. 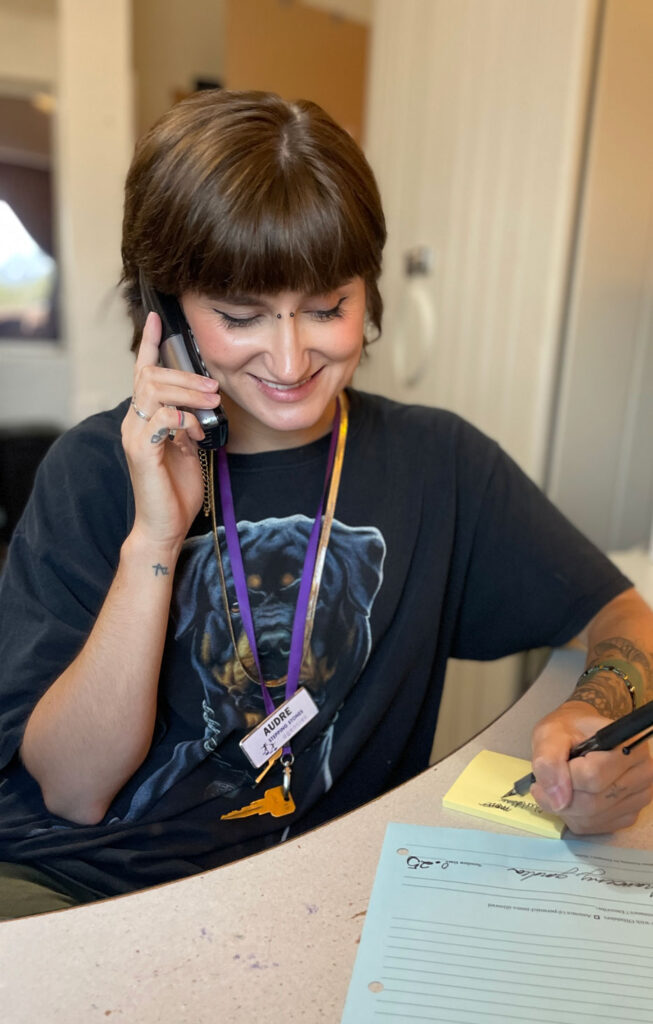 When I came back and asked Stepping Stones for help, I was very, very surprised. I got to the point where I was like well, they can either say no, that’s the worst, or there’s a possibility. Then Melissa [advocate] said yes, and nobody shamed me or guilted me for anything. I was welcomed back without any discouragement, and without ‘No, you knew better.’

I don’t think I’ve ever had anybody as supportive as Melissa in my life. I could trust her 100%, and that’s because of all the things that I’ve gone through. Everything that she’s told me has always been true and supportive. And if I take the suggestions that she offers, nothing bad ever happens.

Learning the Second Time Around

One of the biggest things I’ve learned was how much had happened exactly the way I learned it would when I did the same cycle over again. But this time, I had tools and I knew the difference and I could see it all. I was more open to everything.

Somehow, I feel like I’ve been blessed with some kind of miracle where my ears opened. I couldn’t hear before. I was so scared of everything and so worried about how I was feeling and what was going to happen. Now, I can hear things differently than I ever have before. I want to take it all in because it all makes sense to me now.

I’ve been able to talk to the school and with counselors and teachers, and I actually came out with what she’s gone through so they can understand her better. I wouldn’t have done that if I hadn’t realized a lot of things she needs help with because of the childhood trauma group.

I am still making progress and addressing some issues and concerns with my mental health and housing. I had never done any of that before. I have grown very confident in a lot of ways. I had no confidence whatsoever before, but now I’m making decisions for myself, staying on track, following through with things, knowing that I can’t run anymore. And then I have to work through everything. I have two years sobriety in September, and that, just in itself, is a huge accomplishment.

I have all these tools and I’m teaching my daughter these things now, and so that whatever comes up, she can tell me anything. And, I can help get her the supportive therapy if it’s more than I can provide.

Plus, I really believe that my parents didn’t have those tools. I feel very grateful that I can help address these things for my daughter, break that cycle, and be there for her present and stable, so that she may do that for herself.

Providing Support as a Mentor Advocate

I do my best to give other women hope and encouragement, and a lot of the ladies do feel comfortable talking to me about anything and everything. I can listen and just tell them what I’ve learned from my experience and give them hopefully a feeling of safety. They have made a good decision to do what they’re doing, and they can do it if they really want to.

I help facilitate the kids’ support groups. Some kids didn’t want to participate at all, but then as we go along, they get more comfortable and look forward to it. That’s the best part. It’s like “are we doing group on Saturday?” and they get excited about it, and it turns out to be really awesome. I look forward to it.

I see myself in the future getting housing for my daughter and myself, continuing all the things that I stopped doing last time. Especially for my daughter. She’s in 5th grade. So much change is going to happen with her, and I want her to have all the stability that she deserves. She’s my angel on earth. I know I’m blessed in that department as well.

Advice: You can change your life

For anyone seeking help, you can change your life and break the cycle. Families can feel safe and be open and honest with themselves and the advocates. They can do it if they really want it. And they can be proud about themselves and have stability for their children. It is possible.

I’m actually pretty proud of my life. And I believe it is good for me to share my experience, strength and hope. I learned that through the program as well. It’s working for me, so hopefully it’ll work for somebody else as well. Maybe somebody will just come across it and have that little glimpse of hope.” 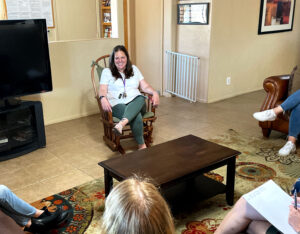